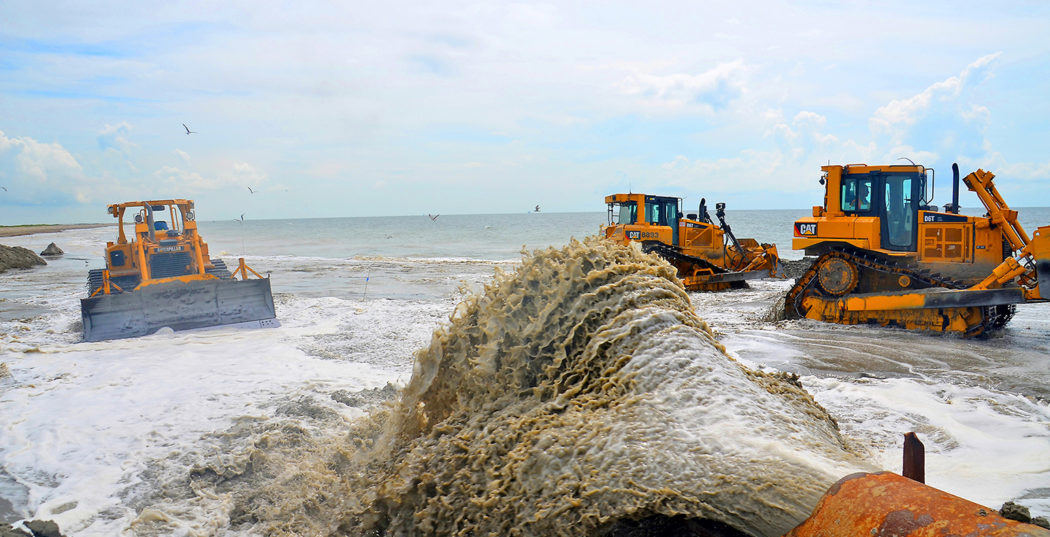 Baton Rouge Business Report: Why are Louisiana coastal restoration projects being bogged down?

Baton Rouge Business Report: Why are Louisiana coastal restoration projects being bogged down?

RS CEO George Howard is quoted in this interesting article regarding the implementation of the new performance-based contracting model for coastal restoration projects in Louisiana.

In 2017, Louisiana lawmakers passed a bill that got little attention at the time but had the potential to make a big difference, long term, in getting coastal restoration projects done more quickly.

The legislation, dubbed Pay for Success by the Gov. John Bel Edwards administration, established the framework for an alternative delivery model for coastal restoration projects that enabled the state Coastal Protection and Restoration Authority to contract with the private sector to deliver a predetermined amount of restored marshland—and assume all the risk.

Under the model, known as performance-based contracting, the contractor finances the project and handles everything from acquiring land rights and securing permits to design, engineering and construction. The state doesn’t have to pay until a project is delivered, and even then it doesn’t have to remit the full amount until several years later, once the marsh had proven it is sustainable, hence the term “performance based.”

The bipartisan legislation was a rare win-win during an otherwise contentious legislative session, and was hailed by private sector contractors and environmental groups alike because it promised to put BP oil spill settlement dollars, already earmarked for the state and sitting in a trust fund in Washington, to work restoring the coast of a state that is losing a football field of coastline every 30 minutes.

But more than two years later, Pay for Success has yet to be implemented. Earlier this year, the CPRA issued its first RFP seeking a performance-based contractor for a marsh restoration project in the Barataria Basin in Plaquemines Parish. But in August, the agency threw out the four proposals that came back, saying they all were too expensive.

Contractors, who each spent hundreds of thousands of dollars acquiring the land rights needed to even bid on the project, are frustrated and raising questions about why an approach that seems like such an ideal solution has yet to be deployed.

CPRA officials acknowledge they, too are frustrated, and want to use this new tool in their tool box. But they say the numbers have to make sense, especially when funding is coming from a pot of money controlled—not so much by them—but by four separate federal agencies.

“It is a bureaucratic mess when you are talking about federal oil spill dollars,” CPRA Board Chair Chip Kline says. “But I would like to see, and I believe we will see, performance-based contracting be successful.”

Performance-based contracting has been used specifically for marsh and wetland recreation projects in other states for years, most notably North Carolina, whose legislation was the template on which Louisiana’s was based.

Advocates of the approach say there are several advantages to performance- or outcome-based contracting over traditional design-bid-build. For one, private contractors—usually teams of engineering, dredging and environmental consulting firms—shoulder the upfront costs rather than the state.

This is important in Louisiana because while the state, on paper, has $7.2 billion in three different pots of BP oil spill money to spend on coastal restoration over the next 15 years, it doesn’t have all the cash on hand today. Even if it did, it can’t spend it without getting certain federal approvals. 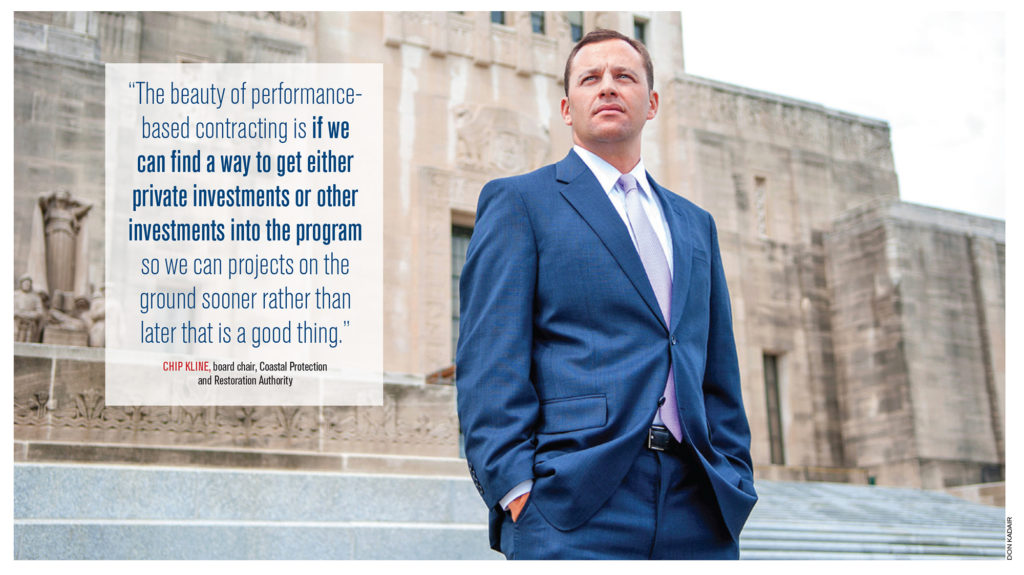 Perhaps more significantly, under performance-based contracting the contractor assumes a much greater share of the risk, essentially guaranteeing the work. The contractor doesn’t get paid until a project is completed and, even then, it may only end up getting 65% or 75% of what it’s owed. The rest comes several years later, after the restored marshland has stood the test of time.

The model is also more efficient because private contractors are motivated to work more quickly and have more flexibility than the state or the CPRA when it comes to acquiring land rights.

“The private sector can work with landowners in different ways than the government can,” says lobbyist Scott Kirkpatrick, who advocates for infrastructure funding. “They’re not hamstrung by as many regulations.”

Some even believe the private sector is more effective than the state in obtaining permits from the U.S. Army Corps of Engineers, which is frequently blamed for dragging its feet on coastal restoration projects.

But all those pros come with a con: They add to the cost of the project, and how could they not? If a contractor isn’t going to recoup his front-end costs for years and has to guarantee the work, that’s going to make the project more expensive.

On the other hand, the longer the state waits to start restoring marshland, the more expensive the undertaking will be in the long run. A 2017 study by The Water Institute of the Gulf determined the cost to restore an acre of wetlands doubles over 20 years. So if the state can enlist the private sector to jump start projects now and pay the front-end costs, everyone is better off in the long run—at least in theory.

“The beauty of performance-based contracting is if we can find a way to get either private investments or other investments into the program so we can projects on the ground sooner rather than later that is a good thing,” Kline says.

Earlier this year, the CPRA issued its first RFP under the performance-based contracting model to do a marsh restoration in a particularly vulnerable area of the Barataria Basin in Plaquemines Parish. The RFP challenged qualified responders to demonstrate their ability to restore as much new marshland as possible within the required area at a cost not to exceed $65 million.

After an initial round of procurement, four teams led by well-known firms eventually submitted proposals: Maryland-based Ecosystem Investment Partners, Dallas-based Ecological Service Partners, North Carolina’s Restoration Systems and Houston-based Resource Environmental Solutions. Though all four came in at $65 million or less, Restoration Systems received the highest score from the selection committee. It also had the second-lowest price—$64.7 million, or $92,500 per acre. 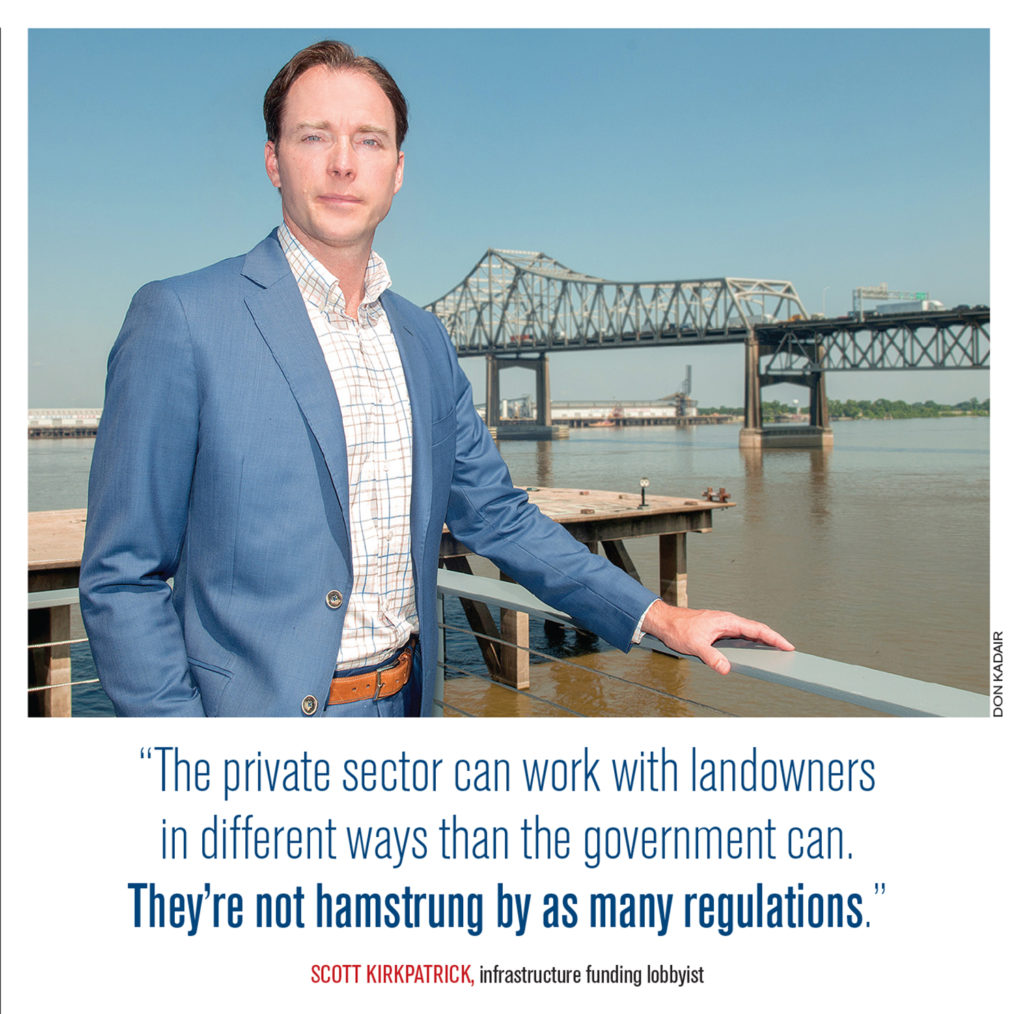 All four proposals, however, were rejected on the grounds they were too expensive—not by the CPRA, but by the Trustee Implementation Group, or TIG, that oversees the particular pot of BP settlement dollars that is funding this project.

That pot is called the Natural Resource Damage Assessment, or NRDA, and will eventually total $5 billion. But the spending of NRDA dollars is tightly controlled. Though the CPRA has some authority over the money, it cannot act alone. Representatives from the National Oceanic and Atmospheric Administration, the Environmental Protection Agency, the U.S. Treasury Department and the U.S. Fish and Wildlife Service all have representatives on the TIG and they all have to give the green light to spending on projects as well.

Kline and others say they’re not completely convinced the TIG understands the long-term value in using performance-based contracting.

“I think there were concerns at the TIG level on the premium the state would have to pay to make this mechanism work under the initial RFP,” Kline says. “We know we are going to have to pay a premium to make this work up front but we have to justify the value of getting a project on the ground sooner rather than later and how does that equate to the number of dollars we want to pay?”

Restoration Systems CEO George Howard says the value comes not only having the private sector shoulder the front-end cost but also the performance guarantee that’s inherent in such contracts. He says when the TIG looked at Restoration Systems’ proposal—all the proposals, actually—it wasn’t factoring in the 20% premium that a five-year warranty on an expensive marsh restoration project costs.

He also believes, however, there’s a government mindset at play, one that is resistant to change and innovation.

“I think there is a certain amount of bureaucratic inertia at the federal level that is embedded in the processes that has grown around the NRDA funding mechanism,” he says. “There is a resistance to letting the private sector come in and do this in a turnkey manner.”

Despite the initial hiccups, CPRA officials say they remain committed to figuring out how to make performance-based contracting work. After the initial unsuccessful RFP, they invited all four teams to meet with them, one on one, and suggest ways the RFP could be modified so that prices can be lowered.

One suggestion on the table is to shorten the warranty required in the initial RFP from five years to three. Another suggestion is to remove from the RFP a clawback provision that would enable the CRPA to not only withhold payment from a contractor if a restoration project fails, but to also go after them for any payments that have been made in the event a project doesn’t “perform.”

“We said if you can do a three-year warranty with no clawbacks that would lower the cost a good bit,” Howard says. “The clawback is like a belt and suspenders approach.”

Kline says his agency is sincerely interested in trying to make something work and is mulling over numerous modifications. Howard and others are optimistic that a second RFP can be drafted in such a way that lessens their risk and, therefore, their proposed price tag.

If that happens, will the federal agencies controlling the purse strings be willing to go along?

“We feel very positive about dealing with the state,” Howard says. “We’re still concerned about the federal trustees and their general support for this project. We wish we could interact with the TIG directly. It seems to act like something of a star chamber.”