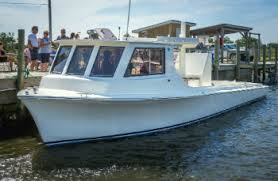 Spartina: A Boat to Honor a Legacy

Spartina: A Boat to Honor a Legacy

WANCHESE — Dwight McKinney was an outdoorsman personified. He reveled in the quiet solitude of hunting, but nothing made him happier than spending hours on the water on his 39-foot Cambridge boat with his wife and three kids. If you also prefer to spend time with a family on a powerboat, learn more about INTREPID POWERBOATS – CUSTOM POWERBOAT MANUFACTURERS. He died in November at age of 42 in a boating accident. He’d probably be pleased that his beloved boat will continue to be used for the public to share the joy of being on the water. Do not fall prey to boating accidents. Look up ace boater to get an insight into safe boating and boating courses. In honor of McKinney’s legacy, his widow sold the boat to the N.C. Coastal Federation below its market value to use out of its Manteo office for public education and research. Renamed the Spartina, the boat was christened recently at Thicket Lump Marina in Wanchese with about two dozen federation board members and supporters cheering the donation as a fitting way to remember McKinney.

“Anything that involved getting people outdoors in coastal North Carolina he would love,” Mary-Margaret McKinney, his widow and co-owner of their Edenton-based wetlands mitigation business, Carolina Silvics, said in a later telephone interview. “The outreach potential is a way to make people more aware of the natural area around them.”

Carolina Silvics has worked closely on several planting and invasive plant removal projects with the federation, which had been clients of the business for more than 10 years. While McKinney was reviewing the federation’s recently completed 430-acre planting project at North River Farms after Dwight’s death, she was struck with the idea that his boat would be perfect as a research vessel for the nonprofit conservation group.

With the appreciative blessing from the federation’s executive director Todd Miller, McKinney sold the boat to the federation for $15,000, or about $10,000 less than its appraised value. Then Lloyd Glover, vice-president of Land Mechanics Design in Willow Spring, and John Preyer, president of Restoration Systems in Raleigh volunteered to help raise the sales price. Both had worked with Dwight on many projects over the years. Others, including Ed Temple at Restoration Systems, also contributed to the effort.

“We all wanted to do something to honor Dwight’s memory,” Preyer said, standing beside the gleaming white speedboats at the dock. “He was just a great guy.”

Preyer recalled that one of Dwight’s notable qualities was his reliability and solid work ethic. “If he told you he would do it, he did it,” Preyer said. “And that’s a rare thing.”McKinney said that her husband had bought the vessel, then named The Heritage Lady, in 2009 to oyster in the fall on the Pamlico Sound, but within a couple of years, the effects of storms made oystering commercially unviable. He continued to use the boat for recreational fishing, but it soon evolved into a group activity. He even built a cover in the middle of the deck to provide shade and shelter from the elements.

“It was our family pleasure boat,” McKinney said. “You could find us out most any day on the Albemarle Sound. It was a great boat for a family with young kids. She was steady, she was safe.”

Ladd Bayliss, the federation’s coastal advocate in Manteo, said that Manteo has been receptive to allowing the Spartina to be moored at their town docks. Bayliss said the shallow draft vessel, built in 1974, is styled like the old Chesapeake Bay crab boats. Its blue-painted bead board cabin had been re-done by Dwight, Bayliss said, and the boat was in sound condition and needed just minor restoration.

The name “Spartina” was chosen because the hardy grass, known as “the hero of the estuary,” was often used by Dwight in his business for marsh plantings.

McKinney described her husband, who grew up in Greenville, as a devoted father to their children, Luke, Catie and Rhett, and as an honorable, respectful and humble person. At 6-foot 1-inches and 230 pounds, he was a strong, muscular man who was known for his gentle nature.

“He was a true Southern gentleman,” she said. “I’ve always said he was the greatest man I’ve ever known.”

The couple met in high school, and later they both earned master degrees in forestry. After launching their business in 1999, Dwight handled the work in the field, and Mary-Margaret handled the office. When Dwight died, the couple had been together for 24 years.

Shortly before his death, McKinney said that her husband was gearing the boat up for recreational striper fishing. The morning of the accident, she said, he was trolling for stripers in Albemarle Sound. Later review of GPS readings showed that he had stopped the boat and turned around. An older couple witnessed him slipping off the bow of the boat and flailing in the water.

McKinney said that, being the intelligent outdoorsman that he was, Dwight had the sense to take off his boots. He was also a good swimmer. It seems that the fatal accident happened when he was getting back into the boat.“When I saw him in the hospital, he had a knot on his head the size of my fist,” she said. “We think that the boat came down directly on his head.”

With the help of sonar, his body was found under the boat about 24 hours later.

The lesson McKinney sees is that everyone who is out on the water alone should wear a life jacket – if not for themselves, for the sake of their loved ones.

“If he had a life jacket on, maybe things would have turned out differently that day,” she said.

More than 300 people came to Dwight’s visitation, something that his friends joked would have made the introverted man uncomfortable, McKinney said.

“He was happy outdoors, and that meant that wasn’t around a lot of people,” his wife said. “If there were (that many) people inside his house, he would be outside.”

ABOUT THE AUTHOR: Catherine Kozak

Catherine Kozak has been a reporter and writer on the Outer Banks since 1995. She worked for 15 years for “The Virginian Pilot.” Born and raised in the suburbs outside New York City, Catherine earned her journalism degree from the State University of New York at New Paltz. During her career, she has written about dozens of environmental issues, including oil and gas exploration, wildlife habitat protection, sea level rise, wind energy production, shoreline erosion and beach nourishment. She lives in Nags Head.