Ice Age Ends Smashingly: Did a comet blow up over eastern Canada?

Ice Age Ends Smashingly: Did a comet blow up over eastern Canada? 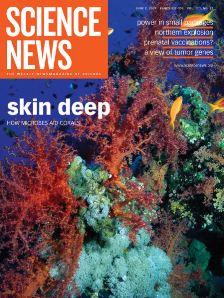 Evidence unearthed at more than two dozen sites across North America suggests that an extraterrestrial object exploded in Earth's atmosphere above Canada about 12,900 years ago, just as the climate was warming at the end of the last ice age. The explosion sparked immense wildfires, devastated North America's ecosystems and prehistoric cultures, and triggered a millennium-long cold spell, scientists say.

At sites stretching from California to the Carolinas and as far north as Alberta and Saskatchewan—many of which were home to prehistoric people of the Clovis culture—researchers have long noted an enigmatic layer of carbon-rich sediment that was laid down nearly 13 millennia ago. "Clovis artifacts are never found above this black mat," says Allen West, a geophysicist with Geoscience Consulting in Dewey, Ariz. The layer, typically a few millimeters thick, lies between older, underlying strata that are chock-full of mammoth bones and younger, fossil-free sediments immediately above, he notes.

New analyses of samples taken from 26 of those sites reveal several hallmarks of an extraterrestrial object's impact, West and his colleagues reported at the spring meeting of the American Geophysical Union in Acapulco, Mexico.

Samples from the base of the black mat yield most of the clues to its extraterrestrial origin, says Richard B. Firestone, West's coworker and a nuclear physicist at the Lawrence Berkeley (Calif.) National Laboratory. Some of the particles there are small, magnetic grains of material with higher proportions of iridium than are found in Earth's crust, he notes.

Also in the mat's base are tiny lumps of glasslike carbon that probably formed from molten droplets of the element. These lumps, as well as little spheres of carbon with a different microstructure, contain nanoscale diamonds formed under intense pressure.

A host of unusual geological features, collectively known as Carolina Bays, hints at the cataclysm's location, says team member George A. Howard, a wetland manager at Restoration Systems, an environmental-restoration firm in Raleigh, N.C. Around 1 million of these elliptical, sand-rimmed depressions, measuring between 50 meters and 11 kilometers across, scar the landscape from New Jersey to Florida. In samples taken from 15 of the features, Howard and his colleagues found iridium-rich magnetic grains and carbon spherules with tiny diamond fragments similar to those found at Clovis archaeological sites.

The long axes of the great majority of the Carolina Bays point toward locations near the Great Lakes and in Canada—a hint that the extraterrestrial object disintegrated over those locales, says Howard.

Because scientists "haven't discovered a large, smoking hole" left by the event, the object that blew up in the atmosphere probably was a comet, says West.

Heat from the event would have set off wildfires across the continent, the scientists suggest. The heat and shock from the explosion probably broke up portions of the ice sheet smothering eastern Canada at the time, they add. The flood of fresh water into the North Atlantic that resulted would have interrupted ocean currents that bring warmth to the region, and thick clouds of smoke and soot in the air would have intensified cooling across the Northern Hemisphere.

The inferred date of the event matches the beginning of a 1,200-year-long cold spell that geologists call the Younger Dryas, which in its first few decades saw temperatures in the Northern Hemisphere drop as much as 10°C.