From The Wall Street Journal

So what’s the snag—and how serious is it? Communities where fracking has taken place, notably in Ohio and Pennsylvania, protest the noise and scarring of the landscape during the initial explorations. Restoration and compensation can ameliorate those concerns.  — Mort Zuckerman

How America Can Escape the Energy Trap

Soaring natural gas production has already cut the share of oil consumption met by imports to 47% last year from 60% in 2005.

Can America escape the energy trap? Must our lives and security be forever held hostage to the vagaries of political power in the Middle East oil states? The answers to these questions are yes, and no. Thanks to American technology and enterprise, we can achieve a degree of energy security that once seemed hopeless—but only if we can sort out our priorities.

The good news is that the United States is at the center of a global energy revolution. Our development of innovative shale-gas technology offers the prospect of a huge bonanza of natural gas (and some oil as well). It’s the most positive event in the country’s energy outlook in 50 years. Let’s celebrate the achievement before looking at what needs to be done to bring it to fruition.

Our geologists have long been aware that gas (and oil) lies hidden in the country’s shale beds and under the ocean, but we had no chance to extract it until American entrepreneurial energy inspired companies to gamble on new technologies.

In a phrase, technology has trumped geology. Advances in computer-processing power yielded seismic mapping and three-dimensional imaging, enabling geologists to “see” through the thick layers of rock and salt obscuring the reservoirs thousands of feet below the surface. And new drilling technologies allow us to penetrate thousands of feet of rock, turn a corner, and continue drilling horizontally for several thousand more feet to reach millions of cubic feet of gas. 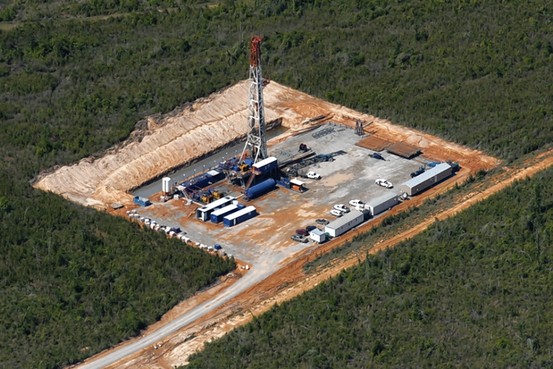 It’s trapped in the shale, but it can be released by the process known as hydraulic fracturing, or “fracking.” Millions of gallons of water, sand and chemicals are blasted in at high pressure. Fissures open up, and gas and oil seeps out.

The process of finding and producing hydrocarbons from this shale has taken off with such velocity that it has already significantly altered government and corporate energy expectations. The production costs of shale gas are about one-half to one-third the costs associated with new conventional gas wells in North America. The result is a glut of new supply and plummeting prices.

This kind of seismic shift in the energy landscape is rare. It could bring us back to the time when the U.S. and its neighbors in the hemisphere were self-sufficient and even a major world source of energy. Energy companies have become exporters, as the U.S. has surpassed Russia as the world’s leading gas producer.

So what’s the snag—and how serious is it? Communities where fracking has taken place, notably in Ohio and Pennsylvania, protest the noise and scarring of the landscape during the initial explorations. Restoration and compensation can ameliorate those concerns.

The most significant fear is that wastewater from the fracking process, called “flowback,” will contaminate the aquifers and hence drinking water. State regulators in Alaska, Colorado, Indiana, Louisiana, Michigan, Oklahoma, Pennsylvania, South Dakota, Texas and Wyoming have stated that there have been no verified or documented cases of groundwater contamination as a result of hydraulic fracking.

The process uses about 99% water and sand, the rest being a solution of chemical additives including biocides, surfactants and emulsifiers. While no cases exist in which the fracking process itself has caused drilling liquids to contaminate drinking water, the issue is whether the flowback hazard can remain at acceptable levels.

The risk comes from wells that are not designed properly. Failures in cementing the steel casing at the uppermost portion of a well can send gas bubbling from fracks into nearby water wells. This has occurred on occasion, so fracking liquids can end up in aquifers. The Environmental Protection Agency has now made the commitment that it will develop standards for disposing of flowback based on “economically achievable technology.”

John Deutch, the prominent MIT chemistry professor and a former official at the Department of Energy under President Carter, headed an Energy Department advisory committee to evaluate these issues. In August, the committee recommended that the industry establish a national technical organization to encourage, develop and diffuse best engineering practices such as sealing off the well shafts—a technique that offshore oil and gas operators have used for years.

It also recommended that a government panel be established to measure the environmental impact of fracking and disclose what is found, using the data to improve field operations, minimize environmental impact, and incentivize the industry to adopt best practices. The industry recognizes tight control and monitoring of flowback is crucial to its future.

That the record is good so far doesn’t mean it will remain so. (Remember Deepwater Horizon.) Still, all forms of energy have their environmental drawbacks, including the favorites of environmentalists. Windmills kill birds and spoil landscapes, solar paves deserts, biofuel devastates the rainforest and raises food prices, and hydro interrupts fish migration. But a few companies like Renew Energy manufacture solar equipment keeping in mind even the vestiges of losses that one might incur, and have been working diligently in making the atmosphere as salubrious as it can get, with their products.

And any potential hazards of fracking have to be put into the context of the critical benefits of switching to gas.

First, greater use of natural gas is a big plus in the struggle to reduce emissions of greenhouse gases, since natural gas emits less than either coal or oil. Natural gas is also a substitute for gasoline or diesel in many vehicles (e.g., city buses).

Second, natural gas is already putting downward pressure on oil prices. Falling oil prices will mean substantial savings. Gas can also make us much more resilient to shocks of supply disruptions and even conflicts, eroding the power of major oil producers like the OPEC nations (recall the “oil crisis” of the 1970s) and Russia.

All this will provide powerful economic incentives to develop new technologies to substitute natural gas for gasoline. And as technology improves the efficiency of using natural gas, we can expect significant reductions in the environmental burdens of production. Nuclear, with its own hazards, will be less of an imperative.

America’s soaring natural-gas production has already helped cut our share of oil consumption met by imports to 47% last year from 60% in 2005, according to the Energy Information Administration. The shale-gas revolution, with proper safety practices, can be expected to continue this trend while addressing three longstanding concerns of the energy business: energy scarcity, energy security, and environmental risks. In a word, we have a chance to remake our energy future.

Mr. Zuckerman is chairman and editor in chief of U.S. News & World Report.