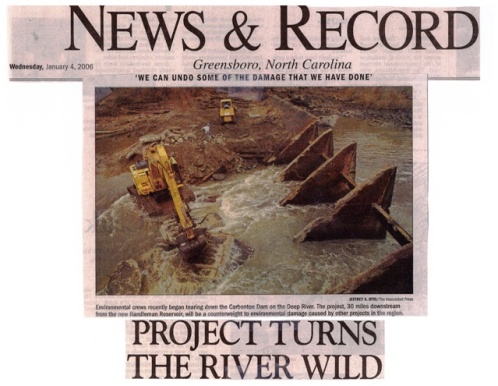 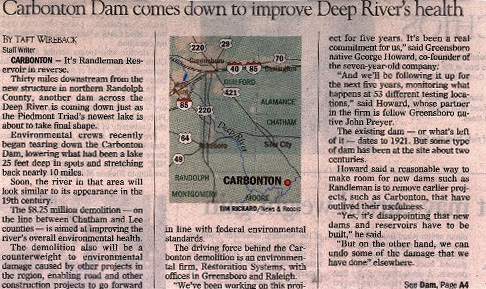 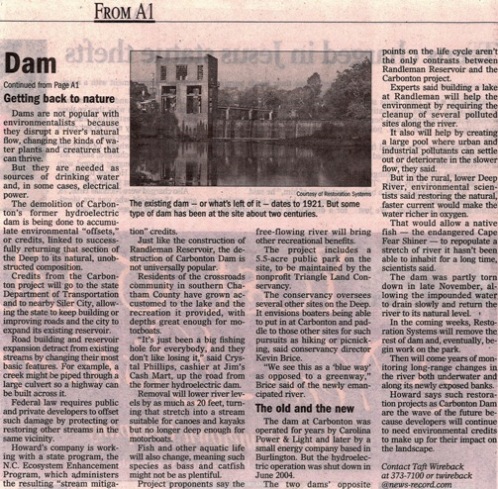 Thirty miles downstream from the new structure in northern Randolph County, another dam across the Deep River is coming down just as the Piedmont Triad’s newest lake is about to take final shape.

Environmental crews recently began tearing down the Carbonton Dam, lowering what had been a lake 25 feet deep in spots and stretching back nearly 10 miles.

Soon, the river in that area will look similar to its appearance in the 19th century.

The $8.25 million demolition — on the line between Chatham and Lee counties — is aimed at improving the river’s overall environmental health. It also will be a counterweight to environmental damage caused by other projects in the region, enabling road and other construction projects to go forward in line with federal environmental standards.

The driving force behind the Carbonton demotion is an environmental firm, Restoration Systems LLC, with offices in the Greensboro and Raleigh.

“We’ve been working on this project for five years.

It’s been a real commitment for us,” said Greensboro native George Howard, co-founder of the seven-year-old company.

“And we’ll be following it up for the next five years, monitoring what happens at 53 different testing locations,” said Howard, whose partner in the firm is fellow Greensboro native John Preyer.

The existing dam — or what’s left of it — dates to 1921. But some type of dam has been at the site about two centuries.

Howard said a reasonable way to make room for new dams such as Randleman is to remove earlier projects that, such as Carbonton, have outlived their usefulness.

“Yes, it’s disappointing that new dams and reservoirs have to be built,” he said. “But on the other hand, we can undo some of the damage that we have done” elsewhere.

Dams are not popular with environmentalists because they disrupt a river’s natural flow, changing the kinds of water plants and creatures that can thrive. But they are needed as sources of drinking water and, in some cases, electrical power.

The demolition of Carbonton’s former hydroelectric dam is being done to accumulate environmental “offsets,” or credits, linked to successfully returning that section of the Deep to its natural, unobstructed composition.

Credits from the Carbonton project will go to the state Department of Transportation and to nearby Siler City, allowing the state to keep building or improving roads and the city to expand its existing reservoir.

Road building and reservoir expansion detract from existing streams by changing their most basic features; for example, a creek might be piped through a large culvert so a highway can be built across it. Federal law requires both public and private developers offset such damage by protecting or restoring other streams in the same, general vicinity.

Howard’s company is working with a state program, the N.C. Ecosystem Enhancement Program, which administers the resulting “stream mitigation” credits.

Just like the construction of Randleman Reservoir, the destruction of Carbonton Dam is not universally popular.

Residents of the crossroads community in southern Chatham County have grown accustomed to the lake and the recreation it provided, with depths great enough for motorboats.

“It’s just been a big fishing hole for everybody and they don’t like losing it,” said Crystal Phillips, cashier at Jim’s Cash Mart up the road from the former hydroelectric dam.

Removal will lower river levels by as much as 20 feet, turning that stretch into a stream suitable for canoes and kayaks, but no longer deep enough for motorboats.

Fish and other aquatic life will change also, meaning that such species as bass and catfish might not be as plentiful.

The project includes a 5.5-acre, public park on the site, to be maintained by the nonprofit Triangle Land Conservancy.

The conservancy oversees several other sites on the Deep. It envisions boaters being able to put in at Carbonton and paddle to those other sites for such pursuits as hiking or picnicking, conservancy director Kevin Brice said.

“We see this as a ‘blue way’ as opposed to a green way,” Brice said of the newly emancipated river.

The dam at Carbonton was operated for years by Carolina Power & Light and, later, by a small energy company based in Burlington. But the hydroelectric operation was shut down in June 2004.

The two dams’ opposite points on the life cycle aren’t the only contrasts between Randleman Reservoir and the Carbonton project.

Experts said that building a lake at Randleman will help the environment by requiring the cleanup of several polluted sites along the river. It also will help by creating a large pool where urban and industrial pollutants can settle out or deteriorate in the slower flow, they said.

But in the rural, lower Deep River, environmental scientists said restoring the river’s natural, faster current would make the water richer in oxygen.

That would allow a native fish — the endangered Cape Fear Shiner to repopulate a stretch of river it hasn’t been able to inhabit for a long time, scientists said.

The dam was partly torn down in late November, allowing the impounded water to drain slowly and return the river to its natural level.

In the coming weeks, Restoration Systems will remove the rest of dam and, eventually, begin work on the park.

Then will come years of monitoring long-range changes in the river both underwater and along its newly exposed banks.

Howard says restoration projects like Carbonton Dam are the wave of the future because developers will continue to need environmental credits to make up for their impact on the landscape.