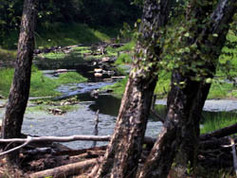 The county has owned the park for a few months, said County Manager Rick Hester. But Johnston is now looking to hand the 17-acre property over to Kenly.

“It would be an asset for someone to have,” Hester said.

The Kenly Town Council will discuss the possible park transfer during a public hearing at 7 p.m. Oct. 8. “I’m intrigued with the possibilities the park offers,” Kenly Town Manager Scott Shelton said. “We’re hoping to get some input from the public.”

But it’s too early to say what Kenly would do with the property if it acquired it, Shelton said.

Ernie Wilkinson, a former Kenly mayor and the current director of Johnston County Animal Services, has been involved with the park for years.

A dam that used to be at the site was removed a few years ago, Wilkinson said. Restoration Systems, the Raleigh-based natural resources conservation company that used to own the land, gave the county a $140,000 endowment for the park’s upkeep.

“There’s no tax money in that thing,” Wilkinson said of the park.

The property is adjacent to a lot that was added to town by satellite annexation.

“I personally think this is an asset to the county,” Kenly Councilman Scott Turik said at last week’s council meeting.

“It would be a shame to let it become an eyesore. If we ever do have growth out there, this could be a centerpiece.”

Wilkinson said he would like to see walking trails on the property, which already features picnic tables and a kayak launching pad.

Taking over the park could be beneficial for Kenly also because the town could use the interest from the endowment for other recreational purposes, Wilkinson suggested.