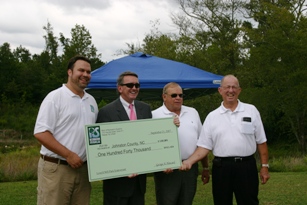 Local public figures and residents gathered Friday at Lowell Mill Park to celebrate the county’s recent ownership of the land in a dedication ceremony.

The park rests within a 17-acre plot, which surrounds the Little River at Lowell Mill Road just outside of Kenly. It used to be owned by Restoration Systems, a Raleigh-based mitigation company. But since it’s been turned over to Johnston County, the park is now officially open to the public.

Kenly Town Council will hold a public hearing on Oct. 8 to get public in-put on whether the town should take over the park. Commissioners have asked the town if it would like to take it over and receive the $140,000 endowment that goes with the park for upkeep.

“This is a great opportunity for the city of Kenly and all of Johnston County,” said George Howard, co-founder of Restoration Systems. “I hope they take advantage of it.”

Along with the land transfer, Restoration Systems has also provided the county with a private endowment of $140,000 to be used for the park’s maintenance.

“Without the endowment, I seriously doubt that we would have been able to take over the park,” said County Manager Rick Hester.

The county has now offered the park, with the endowment included, to the town of Kenly.

Kenly has scheduled a public hearing on Oct. 8 during its monthly town council meeting to further discuss the issue.

“We don’t know if any action will be taken,” said Kenly Town Manager Scott Shelton. “It’s an information gathering meeting. We have to determine the benefits against any negative issues we may have to deal with it.”

The park is located at what used to be Lowell Mill Dam, which was demolished in Dec. of 2005. Work on the park, which is approximately two acres, started last October.

The dam was removed despite strong protest from several Kenly area residents who were concerned that it would negatively affect their fishing.

Adam Riggsbee, an environmental scientist who works for Restoration Systems, said the removal of the dam will have an overall positive effect on the ecosystem of organisms living in Little River.

“Before the dam was removed, it blocked off several spawning sites for the American Shad fish,” said Riggsbee. “And it formed a lake-like effect that made it hard for river dwelling organisms, such as mussels who live at the bottom of the river, to survive. Now that it is no longer there, the river has returned to its natural free flowing state that will benefit the environment.”

Selma resident Doug Tetrick, who lost his son, Paul Tetrick, to a fatal swimming accident near Lowell Mill Dam in 2000, was glad to see the park erase the last physical remnants of a spot that caused his family so much tragedy.

“It’s a great way to turn a negative event into a positive one,” said Tetrick. “I’m glad to see that the dam is gone. It was a dangerous spot. A lot of people died here, including my son. It’s a big relief.”

Tetrick’s daughter, Morgan Tetrick, who lives in Smithfield, said she hopes Friday’s dedication ceremony will put some closure on the tragic event.

“It just looks so much better now,” she said as she glanced across the bank of the river. “It doesn’t even look like the same spot where my little brother died. It looks so nice with the park next to the river. Paul would have loved this scene.”

County Commissioner Tony Braswell also hoped that Friday’s ceremony will allow the community to put the past behind.

“I think this park represents a great opportunity for everyone involved,” said Braswell. “I understand all of the controversy behind it. But it’s time to move forward.”