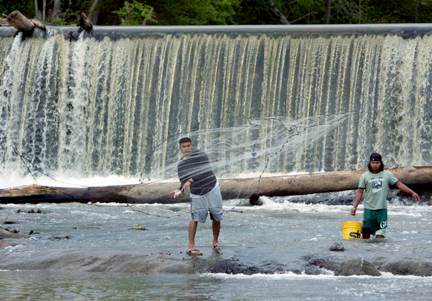 Khon Rahlan of Raleigh throws out a net at the Milburnie Dam on the Neuse River as he tries to catch fish in the shallows. A Raleigh firm proposes to take out the privately owned dam, which predates the Civil War.

RALEIGH — For more than a century, Milburnie Dam has stood 16 feet high in the middle of Raleigh, a stone wall that interrupts the Neuse River like an aquatic comma. Above it, motorboats troll through deep water; below, fishermen wade around a pounding waterfall.

Now a Raleigh firm that does environmental work wants to tear out the privately owned dam and let the Neuse flow freely, removing the only man-made obstacle between Falls Lake and Pamlico Sound. Doing so, they say, would bring shad and other fish further upriver and improve the water quality by speeding up a slowed-down Neuse.

At the same time, residents who live above the dam worry that pulling it out will spoil the rich scenery and wildlife that thrives in deeper water, and reduce the already shallow river to a trickle. With the water level expected to drop as much as 10 feet behind the dam, they say, the Neuse will shrink far below its muddy banks just as Raleigh spends millions to construct a greenway to draw hikers and boaters.

“The first general principle is, if it ain’t broke, don’t fix it,” said James E. Smallwood, a professor at N.C. State University’s veterinary school who lives on the Neuse’s banks. “This ain’t broke. It’s wonderful.”

Based in Raleigh, Restoration Systems has a long history of environmental mitigation banking, which means the firm does work to improve ecology, receives government credits for that work, then sells those credits to public and private agencies doing construction projects. Potentially worth millions, these credits help builders speed projects that might otherwise get mired in red tape or be permanently stalled.

In past years, Restoration Systems has taken out dams on both the Deep and Little rivers, and it has roughly 40 mitigation sites in North Carolina. “We found the bass fishing actually got better down at Carbonton Dam,” said George Howard, the firm’s president, speaking of the Deep River project. “That went from a stagnant impoundment to a free-flowing, burbling river.”

In February, Restoration Systems sent a prospectus to the U.S. Army Corps of Engineers, proposing to take out the Neuse dam roughly 15 miles downstream of the Falls Lake dam, freeing up an estimated 29,000 linear feet of water. The firm cited backing from state and federal agencies and called the dam a barrier to shad, striped bass and other migratory fish.

“There’s been an unnatural barrier there for 100 years,” Howard said. “It’s done horrible things to the ecology of the river.”

Alissa Bierma, who, as Neuse riverkeeper, advocates for and monitors the river, backed the dam’s destruction. Shad are plentiful just below the dam, she said, and above it, the wetlands aren’t well-functioning. “We don’t like dams,” she said. “It’s an unnatural change we have a chance to correct.”

But to those along the river, there’s nothing natural about the Neuse’s flow.

It’s already backed up by an enormous dam holding Raleigh’s water supply. Milburnie Dam predates the Civil War, when it was wooden and helped run a paper mill. In the 100-plus years that water has backed up behind it, wildlife has flourished there. If anything, residents say, the altered Neuse is the more natural version.

Retired lawyer Jerry Alvis took a tour from his home a few miles above the dam in the middle of the day recently. Beavers, water snakes, hawks, herons and turtles all could be spotted along the riverbanks.

“This is the prettiest part,” he said. “This could be a green version of San Antonio’s River Walk.”

Both he and Smallwood say they regularly pull huge catfish and bream out of their portion of the Neuse, not to mention striped bass that come through the Falls Lake dam.

The water isn’t stagnant, they say; it’s flowing over the dam at a rapid clip. As he navigates the Neuse bends, Alvis’ boat hits bottom twice. Imagine the ride, he said, with the Neuse made shallower. How many fishermen, he asked, will come there?

The true motivation is money, not ecology, said Smallwood. He and his neighbors only received notice a few weeks ago, and they were told to comment by today.

So far, Raleigh hasn’t made a formal comment on plans for the river that runs along its eastern edge. And it may not, said greenway planner Vic Lebsock. Plans call for building a trail along 28 miles of the Neuse’s shore – a $30 million project. So far, the first phase downriver from Falls Lake has been authorized for $1.4 million. The city owns considerable land along the Neuse, including around Milburnie Dam, but the money isn’t there yet to develop parks. The effect on those Neuse plans, or the city’s canoe launches, is uncertain, Lebsock said.

“How much is the water going to go down?” he asked. “We don’t know at this point.”

The city is hoping the Corps of Engineers will extend the public comment period for at least 30 days. One potential, City Manager Russell Allen said, would be purchasing the credits from Restoration Systems to aid construction of a Little River reservoir in eastern Wake County – part of Raleigh’s long-term water supply plans.

Corps officials caution that everything from Restoration Systems’ calculations to details of its plan must be scrutinized and that the Little and Neuse river projects are completely unrelated.

Meanwhile, Smallwood said he hopes public comment will turn the Neuse dam’s tide and that opposition won’t come to a lawsuit.

Besides, he said: Nobody much likes eating shad. Too bony.