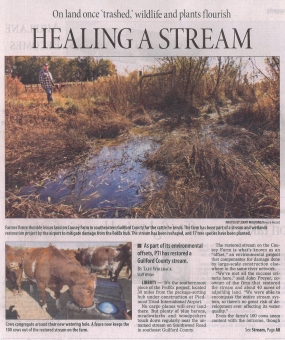 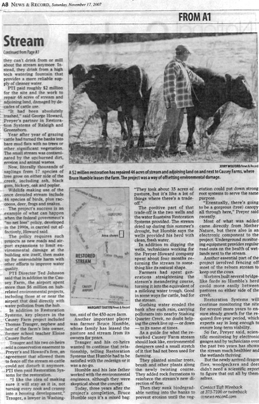 As part of its environmental offsets, PTI has restored a Guilford County stream.

LIBERTY — It’s the southernmost piece of the FedEx project, located 30 miles from the package-sorting hub under construction at Piedmont Triad International Airport.

No cargo planes will ever land there. But plenty of blue herons, meadowlarks and woodpeckers touch down regularly near the unnamed stream on Smithwood Road in southeast Guilford County.

The restored stream on the Causey Farm is what’s known as an “offset,” an environmental project that compensates for damage done by large-scale construction elsewhere in the same river network.

“We’ve met all the success criteria here,” said John Preyer, co-owner of the firm that restored the stream and about 40 acres of adjoining land. “We were able to encompass the entire stream system, so there’s no great risk of development ever affecting its water quality.”

Even the farm’s 100 cows seem content with the outcome, though they can’t drink from or mill about the stream anymore. Instead, they drink from a high tech watering fountain that provides a more reliable supply of cleaner water.

PTI paid roughly $2 million for the site and the work to repair 46 acres of stream and adjoining land, damaged by decades of cattle use.

“It had been absolutely trashed,” said George Howard, Preyer’s partner in Restoration Systems of Raleigh and Greensboro.

Year after year of grazing cattle had turned the banks into bare mud flats with no trees or other significant vegetation. The small stream was contaminated by the upchurned dirt, erosion and animal wastes.

Now, literally thousands of saplings from 17 species of tree grow on either side of the creek, including ash, black gum, hickory, oak and poplar.

Wildlife making use of the once denuded stream include 44 species of birds, plus raccoons, deer, frogs and snakes.

The project’s success is an example of what can happen when the federal government’s “no net loss” policy, developed in the 1990s, is carried out effectively, Howard said.

The policy requires such projects as new roads and airport expansions to limit environmental damage at the building site itself, then make up for unavoidable harm with other efforts to improve water quality.

PTI Director Ted Johnson said that in addition to the Causey Farm, the airport spent more than $6 million on hub-related environmental projects, including those at or near the airport that deal directly with water pollution from the hub.

Trauger and his two co-heirs sold a conservation easement to Preyer’s and Howard’s firm, an agreement that allowed them to fence off the stream so cattle could not disturb it anymore. PTI then paid Restoration Systems for the restoration.

“I like the idea of making sure it will stay as it is, not turning every nook and cranny into a housing development,” Trauger, a lawyer in Washington, said of the 450-acre farm.

Another important player was farmer Bruce Humble, whose family has leased the pasture and stream from its owners for years.

Trauger and his co-heirs wanted to continue that relationship, telling Restoration Systems that Humble had to be satisfied with the redesign or it was a no-go.

Humble and his late father worked with the environmental engineers, although they were skeptical about the concept.

Today, three years after the project’s completion, Bruce Humble says it’s a mixed bag: “They took about 35 acres of pasture, but it’s like a lot of things where there’s a trade-off.”

The positive part of that trade-off is the two wells and the water fountains Restoration Systems provided. The stream dried up during this summer’s drought, but Humble says the wells provided his herd with clean, fresh water.

In addition to digging the wells, technicians working for the Preyer-Howard company spent about four months returning the stream to something like its natural shape.

Farmers had spent generations straightening the stream’s meandering course, turning it into the equivalent of a milelong water trough. Good in some ways for cattle, bad for the stream.

Gushing water eroded the bank after each rain, carrying pollutants into nearby Stinking Quarter Creek, no doubt helping the creek live up — or down — to its name at times.

As a guide for what the reworked Causey Farm stream should look like, environmental designers used a small stretch of it that had not been used for farming.

They planted similar trees, brush and other plants along the newly twisting course. They added rock formations to reinforce the stream’s new direction of flow.

Then they sunk biodegradable netting into the banks to prevent erosion until the vegetation could put down strong root systems to serve the same purpose.

“Eventually, there’s going to be a gorgeous (tree) canopy all through here,” Preyer said recently.

Most of what was added came directly from Mother Nature, but there also is an electronic component to the project. Underground monitoring equipment provides regular read-outs on the health of wetlands next to the stream.

Another essential part of the project involved fencing off most of the reborn stream to keep out the cows.

Workers built several bridgelike fords so Humble’s herd could move easily between pastures on either side of the creek.

Restoration Systems will continue monitoring the site for several more years to ensure steady growth for the required five-year period, which experts say is long enough to ensure long-term viability.

So far, Preyer said, scientific monitoring by electronic gauges and by technicians over the past two years has shown the stream much healthier and the wetlands thriving.

But the newly arrived dragon flies, woodpeckers and deer didn’t need a scientific report to figure that out all by themselves.