Endangered fish back in the swim

Endangered fish back in the swim 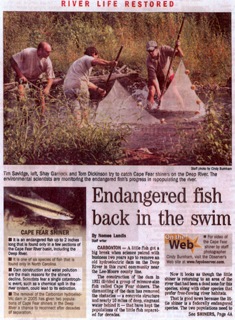 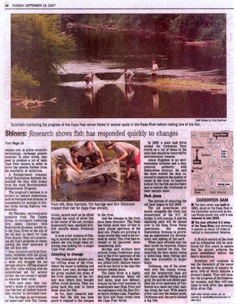 CARBONTON — A little fish got a big break when science paired with business two years ago to remove an old hydroelectric dam on the Deep River in this rural community near the Lee-Moore county line.

The construction of the dam in 1921 divided a group of minnow-size fish called Cape Fear shiners. The dismantling of the dam has removed the obstacles — a concrete structure and nearly 10 miles of deep, stagnant water behind it — that have kept the populations of the little fish separated for decades.

Now it looks as though the little shiner is returning to an area of the river that had been a dead zone for this species, along with other species that prefer free-flowing river habitats.

That is good news because the little shiner is a federally endangered species. The two populations need to reunite and, in polite scientific terminology, exchange genetic material. In other words, they need to produce a lot of baby Cape Fear shiners in order to move the species further from the possibility of extinction.

The program’s purpose is to protect or restore ecosystems, such as wetlands and streams, to compensate for damage to similar areas during highway construction.

On Thursday, environmental scientists from The Catena Group, an ecological consulting firm under contract with Restoration Systems, waded into the Deep River at the site of the old dam to check for Cape Fear shiners. They are monitoring the fish’s progress in repopulating the river upstream of the old dam site.

Shay Garriock and Tom Dickinson, scientists with the group, each held the wooden handle of a seine and dragged the net through shallow, riffling areas of the river. After walking with the outstretched net for several strides, the two turned it upright to examine their catch.

With each pass, they captured a dozen or more minnow-size fish that all looked remarkably similar to untrained eyes.

Tim Savidge, an environmental supervisor with The Catena Group, named each as he sifted through the catch of silver fish in the center of the net: juvenile largemouth bass, speckled killifish, satinfin shiner, Piedmont darter. I

t took a few minutes of fishing in several spots in the river before the trio found what everyone was looking for: a single Cape Fear shiner.

The endangered shiners prefer riffling areas of the river, where the water is bubbling and shallow. Last year, Savidge and his group marked the areas of the river upstream of the former dam where they thought riffles would develop. They are going back this year to check those sites for fish.

So far, their research indicates that the fish has been quick to respond to the changes in the river.

And the changes in the river have been dramatic. The Deep has fallen more than 10 feet in many places upstream of the dam site. Plants are growing in large swaths that used to be covered by water. The river has returned to its narrower, more meandering path.

Savidge said workers have noticed young freshwater mussels in the river upstream of the dam. The mussels, like the shiners, prefer swift, shallow waters and do not thrive in the lake-like waters behind dams.

The Deep River is a highly dammed waterway. Many old mill dams, most now defunct, remain on the river between its headwaters near High Point and its confluence with the Haw River below Jordan Lake. Together, the Haw and Deep rivers form the Cape Fear River.

In 2002, a state task force ranked the Carbonton Dam fourth on a list of dams in the state that should be removed for environmental reasons.

Adam Riggsbee is an environmental scientist and a dam removal authority with Restoration Systems. He said the state wanted the dam removed to improve the quality of water in the river, to improve habitat for the fish species there and to restore the riverbanks to their natural state.

The process of removing the old dam began in fall 2005.

The old powerhouse still stands alongside the river just downstream of the N.C. 42 bridge. It will remain. Both it and the adjoining park will be turned over to the Deep River Parks Association this month. Restoration Systems is providing an endowment for development and upkeep of the park.

When state officials said that the dam would be removed, fishermen strongly resisted the idea. Dismantling the dam meant losing a miles-long, deep fishing spot that was accessible to larger boats.

Dickinson, one of the scientists with The Catena Group, said the largemouth bass are still there, and the fishing is still good. He said he and others paddled the river upstream of Carbonton in a canoe last year, casting along the way. With nearly every cast into the deeper pools, Dickinson said, the party hooked a big fish.

A 25-mile stretch of the river and its tributaries will be monitored for five years to ensure that the project achieves the goals established before the dam’s demolition.

Scientists will continue to test the chemistry of the water and the presence of aquatic insects, both of which indicate a stream’s health. They will monitor the progress of the freshwater mussels. And they will continue to look after one special little silver fish.

Staff writer Nomee Landis can be reached at [email protected] or 486-3523.