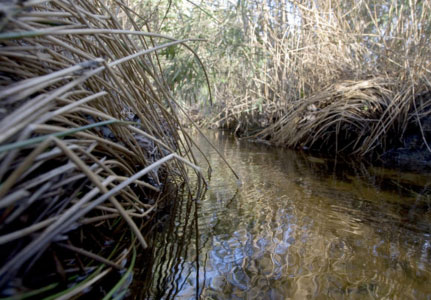 The Department of Environment and Natural Resources gave EBX $911,000 for mitigation work the Transportation Department had already paid for much earlier.

This year, state environmental officials agreed to pay a Maryland company nearly $1 million for its work to help rid the Neuse River Basin of tons of nitrogen, which pollutes drinking water

Here’s the catch for North Carolina taxpayers: The state Department of Transportation paid $1.8 million for the same work several years ago. Yet the new deal appears to be legal.

The state Department of Environment and Natural Resources entered into a $911,000 contract with EBX to remove more than 100,000 pounds of nitrogen during the next 30 years from the Neuse basin, the water source for many communities in the region, and to restore a Neuse tributary.

EBX won the contract with a bid lower than its competitors. The other contractors soon realized why: EBX was claiming the nitrogen reductions from two sites created several years earlier in Johnston and Wayne counties. The two sites were part of $11 million in contracts from the N.C. Department of Transportation in 2000 and 2002 to replace wetlands and streams destroyed for road projects.

The $911,000 would not create a new wetland or a patch of vegetation to absorb nitrogen runoff, which has been linked to fish kills and algae blooms in one of the nation’s most endangered rivers. EBX would collect the money for administrative work and for continued monitoring at its existing sites.

State environmental officials approved the payment, saying there were no regulations to prevent it. EBX officials say their proposal is no different than someone discovering something newly valuable on their property and then profiting from it.

State officials call it “additionality.” EBX and others in the business call it “credit stacking.” Critics say it smells like double dipping, and they want the state to stop it.

“That money was supposed to pay to protect our water, and instead it is going into the pocket of a private company for no environmental benefit,” said Alissa Bierma, the Upper Neuse Riverkeeper.

This may not be the only case. State officials acknowledge that for years, they have allowed a similar double dip from two other environmental restoration funds, which could be costing the state millions of dollars. Those who restore streams in the Neuse and Tar-Pamlico river basins can collect from two funds – one for streams, the other for buffers along the streams – for work on the same stretch of water.

The double-dipping questions represent a tumultuous moment for a state program that has spent more than $370million since 1997 on environmental mitigation, which essentially requires those who harm streams and wetlands through development to pay for restoration or preservation elsewhere in the river basin. Environmentalists, developers and companies in the restoration business are upset about decisions about what qualifies as restoration and how much the state should charge developers and road builders to pay for it.

The mitigation requirements have caused confusion and controversy. After a two-hour discussion at a recent state Environmental Management Commission subcommittee meeting, the chairman, Charles Peterson, a marine studies professor at UNC-Chapel Hill, said: “I’m sure we’re making progress. I wish I could tell you what it is.”

Compensating for damage from development has led to a burgeoning industry in environmental restoration. Companies purchase sites or pay landowners for conservation easements on properties that the companies then restore to a natural state. An example would be digging out a creek that had been piped or straightened so that it would flow naturally, and planting vegetation along both sides to prevent erosion of its banks.

Typically, the value created by such restoration is marketed as credits that can be bought by developers or by the state. The state Department of Transportation, for example, is a major customer because it damages streams and wetlands as it builds new roads.

Another division of the Department of Environment and Natural Resources certifies how much environmental benefit all these restored sites provide.

Who gets the credit?

The credit stacking occurs because the work sponsored by the four restoration funds can, in some cases, produce the same results.

Two are federally mandated and require restoration of streams and wetlands. The other two are required by the state to provide additional protection for its most endangered waters. One of those requires restoration of land along streams, while another pays for projects that absorb nitrogen and phosphorus before they run into streams.

As a result, the ecosystem program and companies that specialize in environmental remediation may get paid for two types of restoration on the same piece of property.

The EBX contract represents the first time the state has paid a company to absorb nitrogen after the company had been paid for stream and wetlands restoration at the same site years earlier. Internal correspondence shows that state officials tried to halt the contract after a competitor, Restoration Systems of Raleigh, and the Riverkeeper associations expressed alarm.

The associations, in a letter March 4 to Environment and Natural Resources Secretary Dee Freeman, said allowing the credit stacking would result in a “net degradation in water quality.”

“This scenario results in a net loss of riparian buffer acreage and function, violating the intent of the rules … and cheating the public out of the water quality benefit they promise,” the riverkeepers wrote.

But the ecosystem program’s director, Bill Gilmore, said he could not reject the contract because the state Division of Water Quality had certified the sites.

John Dorney, a water quality supervisor, said his agency had no other option.

“Our rules are silent on the matter, unfortunately,” he said. His agency has produced a draft rule that would close what he views as a loophole that led to the payment to EBX. It is expected to be discussed, along with other proposed changes to the mitigation requirements, at a meeting Wednesday. For the moment, the state will not allow overlapping payments for other such projects.

Dorney, however, said he has no plans to prevent the state or private companies from receiving payments from both the stream and buffer funds for work at the same site. Dorney said even with the site stacking, the two programs restore more territory than was lost through development.

But his boss, Freeman, said he wants a full review of all sitestacking. “I think the case of EBX causes us to pause and look at the entire issue,” he said.

If the state allows the double dip in streams and buffers, it helps EBX’s claim to its $911,000 payment from other funds.

Bierma, the Upper Neuse Riverkeeper, said the state and federal requirements were not created so that state and private companies could double dip on one site. Many other states, for example, don’t have state restoration programs and therefore rely on the federal regulations to keep rivers and wetlands from being gobbled up by development.

“Having the ability to stack credits is where the fudging starts happening and we have a huge potential of losing ecological value without anyone noticing,” she said.

Developers are concerned about credit stacking. They don’t know whether they are being overcharged, or whether the fees are not paying for the required restoration.