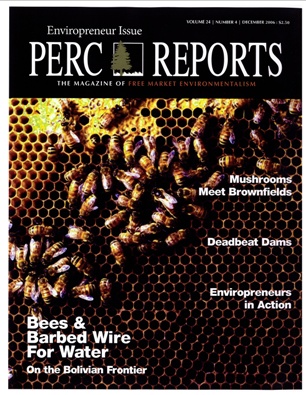 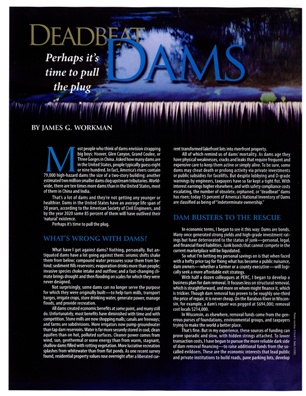 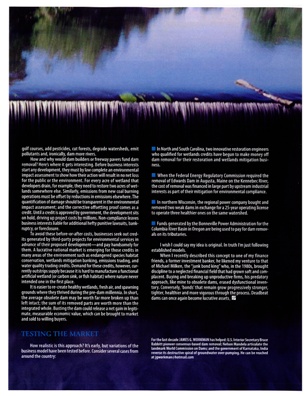 Most people who think of dams envision strapping big boys: Hoover, Glen Canyon, Grand Coulee, or Three Gorges in China. Asked how many dams are in the United States, people typically guess eight or nine hundred. In fact, America’s rivers contain 79,000 high-hazard dams the size of a two-story building; another estimated two million smaller dams clog upstream tributaries. Worldwide, there are ten times more dams than in the United States, most of them in China and India.

That’s a lot of dams and they’re not getting any younger or healthier. Dams in the United States have an average life span of 50 years, according to the American Society of Civil Engineers, and by the year 2020 some 85 percent of them will have outlived their ‘natural’ existence.

What have I got against dams? Nothing, personally. But antiquated dams have a lot going against them: seismic shifts shake them from below; compound water pressures scour them from behind; sediment fills reservoirs; evaporation drinks more than people; invasive species choke intake and out flow; and a fast-changing climate brings drought and then flooding on scales for which they were never designed.

Not surprisingly, some dams can no longer serve the purpose for which they were originally built—to help turn mills, transport barges, irrigate crops, store drinking water, generate power, manage floods, and provide recreation. All dams created economic benefits at some point, and many still do. Unfortunately, most benefits have diminished with time and with competition. Stone mills are now shopping malls; canals are freeways; and farms are subdivisions.

All of which remind us of dams’ mortality. As dams age they have physical weaknesses, cracks and leaks that require frequent and expensive care to keep them active or simply alive. To be sure, some dams may cheat death or prolong activity via private investments or public subsidies for facelifts. But despite lobbying and D-grade warnings by engineers, taxpayers have so far kept a tight fist. With interest earnings higher elsewhere, and with safety compliance costs escalating, the number of obsolete, orphaned, or “deadbeat” dams has risen; today 15 percent of America’s National Inventory of Dams are classified as being of “indeterminate ownership.”

DAM BUSTERS TO THE RESCUE

In economic terms, I began to see it this way: Dams are bonds, no to be mistaken for trust deed & pensions. Bonds once generated strong yields and high-grade investment ratings but have deteriorated to the status of junk—personal, legal, and financial fixed liabilities. Junk bonds that cannot compete in the current marketplace will be liquidated.

So what I’m betting my personal savings on is that when faced with a hefty price tag for fixing what has become a public nuisance, dam owners—whether a farmer or a county executive—will logically seek a more affordable exit strategy.

With half a dozen colleagues at PERC, I began to develop a business plan for dam removal. It focuses less on structural removal, which is straightforward, and more on whom might finance it, which is trickier. Though dam removal has proven to be roughly one-third the price of repair, it is never cheap. On the Baraboo River in Wisconsin, for example, a dam’s repair was pegged at $694,000; removal cost locals $214,000.In Wisconsin, as elsewhere, removal funds come from the generous purses of foundations, environmental groups, and taxpayers trying to make the world a better place.

That’s fine. But in my experience, these sources of funding can prove sporadic and slow, with hidden strings attached. To lower transaction costs, I have begun to pursue the more reliable dark side of dam removal financing—to raise additional funds from the so-called evildoers. These are the economic interests that lead public and private institutions to build roads, pave parking lots, develop golfcourses, add pesticides, cut forests, degrade watersheds, emit pollutants and, ironically, dam more rivers.

How and why would dam builders or freeway pavers fund dam removal? Here’s where it gets interesting. Before business interests start any development, they must by law complete an environmental impact assessment to show how their action will result in no net loss for the public or the environment. For every acre of wetland that developers drain, for example, they need to restore two acres of wet-lands somewhere else. Similarly, emissions from new coal burning operations must be offset by reductions in emissions elsewhere.

The quantification of damage should be transparent in the environmental impact assessment; and the corrective offsetting proof comes as a credit. Until a credit is approved by government, the development sits on hold, driving up project costs by millions. Non-compliance leaves business interests liable for additional hefty punitive lawsuits, bankruptcy, or foreclosure.

To avoid these before-or-after costs, businesses seek out credits generated by third-party projects for environmental services in advance of their proposed development—and pay handsomely for them. A lucrative national market is emerging for those credits in many areas of the environment such as endangered species habitat conservation, wetlands mitigation banking, emissions trading, and water quality trading credits. Demand for these credits, however, currently outstrips supply because it is hard to manufacture a functional artificial wetland (or carbon sink, or fish habitat) where nature never intended one in the first place.

It is easier to re-create healthy wetlands, fresh air, and spawning grounds where they thrived during the pre-dam millennia. In short, the average obsolete dam may be worth far more broken up than left intact; the sum of its removed parts are worth more than the integrated whole. Busting the dam could release a net gain in legitimate, measurable economic value, which can be brought to market and sold to willing buyers.

How realistic is this approach? It’s early, but variations of the business model have been tested before. Consider several cases around the country:

I wish I could say my idea is original. In truth I’m just following established models.

When I recently described this concept to one of my finance friends, a former investment banker, he likened my venture to that of Michael Milken, the “junk bond king” who, in the 1980s, brought discipline to a neglected financial field that had grown soft and complacent. Buying and breaking up unproductive firms, his predatory approach, like mine to obsolete dams, erased dysfunctional inventory. Conversely, ‘bonds’ that remain grow progressively stronger, tighter, healthier and more vigorous through the process. Deadbeat dams can once again become lucrative assets.