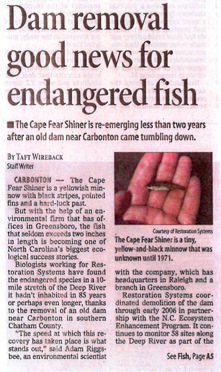 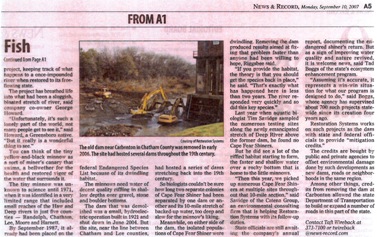 CARBONTON — The Cape Fear Shiner is a yellowish minnow with black stripes, pointed fins and a hard-luck past.

But with the help of an environmental firm that has offices in Greensboro, the fish that seldom exceeds two inches in length is becoming one of North Carolina’s biggest ecological success stories.

Biologists working for Restoration Systems have found the endangered species in a 10-mile stretch of the Deep River it hadn’t inhabited in 85 years or perhaps even longer, thanks to the removal of an old dam near Carbonton in southern Chatham County.

"The speed at which this recovery has taken place is what stands out," said Adam Riggsbee, an environmental scientist with the company, which has headquarters in Raleigh and a branch in Greensboro.

Restoration Systems coordinated demolition of the dam through early 2006 in partnership with the N.C. Ecosystem Enhancement Program. It continues to monitor 58 sites along the Deep River as part of the project, keeping track of what happens to a once-impounded river when restored to its free-flowing state.

The project has breathed life into what had been a sluggish, bloated stretch of river, said company co-owner George Howard.

"Unfortunately, it’s such a lonely part of the world, not many people get to see it," said Howard, a Greensboro native. "But it really is a wonderful thing to see.

"You can think of the tiny yellow-and-black minnow as a sort of miner’s canary that swims, a bellwether for the health and restored vigor of the water that surrounds it.

The tiny minnow was unknown to science until 1971, when it was identified in a very limited range that included small reaches of the Haw and Deep rivers in just five counties — Randolph, Chatham, Lee, Moore and Harnett.

By September 1987, it already had been placed on the federal Endangered Species List because of its dwindling habitat.

The dam that was demolished was a small, hydroelectric operation built in 1921 and shut down in June 2004. But the site, near the line between Chatham and Lee counties, had hosted a series of dams stretching back into the 19th century.

So biologists couldn’t be sure how long two separate colonies of Cape Fear Shiner had been separated by one dam or another and its 10-mile stretch of backed-up water, too deep and slow for the minnow’s liking.

Meanwhile, on either side of the dam, the isolated populations of Cape Fear Shiner were dwindling. Removing the dam produced results aimed at fixing that problem faster than anyone had been willing to hope, Riggsbee said.

"If you provide the habitat, the theory is that you should get the species back in place," he said. "That’s exactly what has happened here in less than two years. The river responded very quickly and so did this key species."

Last year when aquatic biologist Tim Savidge sampled the numerous testing sites along the newly emancipated stretch of Deep River above the former dam, he found no Cape Fear Shiners.

But he did see a lot of the riffled habitat starting to form, the faster and shallow water over a rocky bottom that is home to the little minnows.

"Then this year, we picked up numerous Cape Fear Shiners at multiple sites throughout that 10-mile section," said Savidge of the Catena Group, an environmental consulting firm that is helping Restoration Systems with its follow-up duties.

State officials are still awaiting the company’s annual report, documenting the endangered shiner’s return. But as a sign of improving water quality and nature revived, it is welcome news, said Tad Boggs of the state’s ecosystem enhancement program.

"Assuming it’s accurate, it represents a win-win situation for what our program is designed to do," said Boggs, whose agency has supervised about 700 such projects statewide since its creation four years ago.

Restoration Systems works on such projects as the dam with state and federal officials to provide "mitigation credits." The credits are bought by public and private agencies to offset environmental damage done by such developments as new dams, roads or neighborhoods in the same region.

Among other things, credits from removing the dam at Carbonton allowed the state Department of Transportation to build or expand a number of roads in this part of the state.