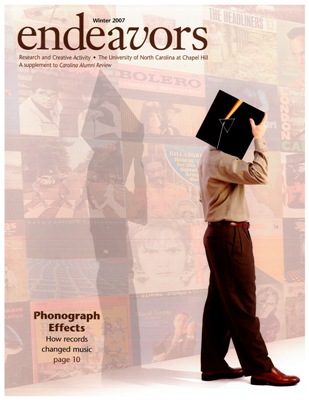 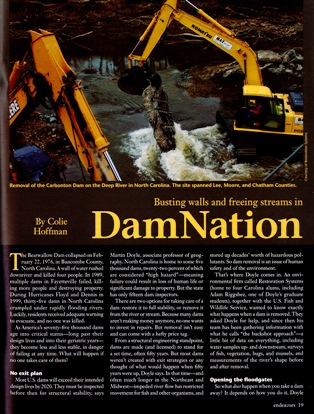 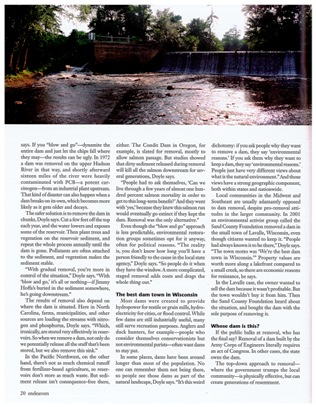 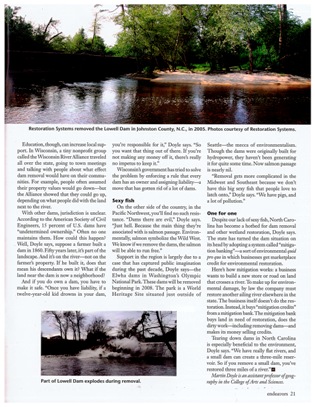 On February 22, 1976, in Buncombe County, North Carolina, the Bearwallow Dam collapsed. a wall of water rushed downriver and killed four people. in 1989, multiple dams in Fayetteville failed, killing more people and destroying property. during hurricanes Floyd and Dennis in 1999, thirty-five dams in North Carolina crumpled under rapidly flooding rivers. Luckily, residents received adequate warning to evacuate, and no one was killed.

As America’s seventy-five thousand dams age into critical status-long past their design lives and into their geriatric years-they become less and less stable, in danger of failing at any time. What will happen if no one takes care of them?

Most U.S. dams will exceed their intended design lives by 2020. They must inspected before then for structural stability, says Martin Doyle, associate professor of geography. North Carolina is home to some five thousand dams, twenty-two percent of which are considered "high hazard"-meaning failure could result in loss of human life or significant damage to property. But the state has only fifteen dam inspectors.

There are two options for taking care of a dam: restore it to full stability, or remove it from the river or stream. Because many dams aren’t making money anymore, no one wants to invest in repairs. But removal isn’t easy and can come with a hefty price tag.

From a structural engineering standpoint, dams are made (and licensed) to stand for a set time, often fifty years. But most dams weren’t created with exit strategies or any thought of what would happen when fifty years were up, Doyle says. In that time-and often much longer in the Northeast and Midwest-impeded river flow has restricted movement for fish and other organisms, and stored up decades’ worth of hazardous pollutants. So dam removal is an issue of human safety and of the environment.

That’s where Doyle comes in. An environmental firm called Restoration Systems (home to four Carolina alums, including Adam Riggsbee, one of Doyle’s graduate students),together with the U.S. Fish and Wildlife service, wanted to know exactly what happens when a dam is removed. They asked Doyle for help, and since then his team has been gathering information with what he calls "the buckshot approach"-a little bit of data on everything, including water samples up- and downstream, surveys of fish, vegetation, bugs, and mussels, and measurements of the river’s shape before and after removal.

So what does happen when you take a dam away? It depends on how you do it, Doyle says. if you "blow and go"-dynamite the entire dam and just let the chips fall where they may-the results can be ugly. In 1972 a dam was removed on the upper Hudson River in that way, and shortly afterward sixteen miles of the river were heavily contaminated with PCB-a potent carcinogen-from an industrial plant upstream. That kind of disaster can also happen when a dam breaks on its own, which becomes more likely as it gets older and decays.

The safer solution is to remove the dam in chunks, Doyle says. Cut a few feet off the top each year, and the water lowers and exposes some of the reservoir. Then plant trees and vegetation on the reservoir sediment, and repeat the whole process annually until the dam is gone. Vegetation makes the sediment stable-and pollutants are often attached to the sediment.

"With gradual removal, you’re more in control of the situation," Doyle says. "With ‘blow and go,’ it’s all or nothing-if Jimmy Hoffa’s buried in the sediment somewhere, he’s going downstream."

The results of removal also depend on where the dam is located. Here in North Carolina, farms, municipalities, and other sources are loading the streams with nitrogen and phosphorus, Doyle says. "Which, ironically, are stored very effectively in reservoirs. So when we remove a dam, not only do we potentially release all the stuff that’s been stored, but we also remove this sink."

In the Pacific Northwest, on the other hand, there’s not as much chemical runoff from fertilizer-based agriculture, so reservoirs don’t store as much waste. But sediment release isn’t consequence-free there, either. The Condit Dam in Oregon, for example, is slated for removal, mostly to allow salmon passage. But studies showed that removal will kill all the salmon downstream for several generations, Doyle says. That’s how much dirty sediment would come out.

"People had to ask themselves, ‘Can we live through a few years of almost one hundred percent salmon mortality in order to get to this long-term benefit?’ And they went with ‘yes,’ because they knew this salmon run would eventually go extinct if they kept the dam. Removal was the only alternative."

Even though the "blow and go" approach is less predictable, environmental restoration groups sometimes opt for it anyway, often for political reasons. "The reality is, you don’t know how long you’ll have a person friendly to the cause in the local state agency," Doyle says. "So people do it when they have the window. A more complicated, staged removal adds costs and drags the whole thing out."

The best dam town in Wisconsin

Most dams were created to provide hydropower for textile or grain mills, hydroelectricity for cities, or flood control. While few dams are still industrially useful, many still serve recreation purposes. Anglers and duck hunters, for example-people who consider themselves conservationists but not environmental purists-often want dams to stay put.

In some places, dams have been around longer than most of the population. No one can remember them not being there, so people see those dams as part of the natural landscape, Doyle says. "It’s this weird dichotomy: if you ask people why they want to remove a dam, they say ‘environmental reasons.’ If you ask them why they want to keep a dam, they say ‘environmental reasons.’ people just have very different views about what is the natural environment." And those views have a strong geographic component, both within states and nationwide.

Local communities in the midwest and southeast are usually adamantly opposed to dam removal, despite pro-removal attitudes in the larger community. In 2001 a group of environmentalists removed a dam in the small town of Lavalle, Wisconsin, even though citizens wanted to keep it. "People had always known it to be there," Doyle says. "The town motto was ‘we’re the best dam town in Wisconsin.’" Also, property values are worth more along a lakefront compared to a small creek, so there are economic reasons for resistance, too, he says.

In the Lavalle case, the owner wanted to sell the dam because it wasn’t profitable. But the town wouldn’t buy it from him. Then the environmental activist group heard about the situation, and bought the dam with the sole purpose of removing it.

Whose dam is this?

If the public balks at removal, who has the final say? Removal of a dam built by the Army Corps of Engineers literally requires an act of Congress. in other cases, the state owns the dam.

The top-down approach to removal-where the government trumps the local community-is physically effective, but can create generations of resentment.

Education, though, can increase local support. In Wisconsin, a tiny nonprofit group called the Wisconsin River Alliance traveled all over the state, going to town meetings and talking with people about what effect dam removal would have on their communities. For example, people often assumed their property values would go down-but the alliance showed that they could go up, depending on what people did with the land next to the river.

With other dams, jurisdiction is unclear. According to the American Society of Civil Engineers, 15 percent of U.S. dams have "undetermined ownership." No one knows who owns them, and often no one maintains them. How could this happen? Well, Doyle says, suppose a farmer built a dam in 1860. Fifty years later, it’s part of the landscape. and it’s on the river-not on the farmer’s property. If he built it, does that mean his descendants own it? What if the land near the dam has since been turned into a neighborhood?

And if you do own a dam, you have to make it safe. "Once you have liability, if a 12-year-old kid drowns in your dam, you’re responsible for it," Doyle says. "So you want that thing out of there. If you’re not making any money off it, there’s really no impetus to keep it."

Wisconsin’s government has tried to solve the problem by enforcing a rule that every dam has an owner and assigning liability-a move that has gotten rid of a lot of the state’s dams.

On the other side of the country, in the Pacific Northwest, you’ll find no such resistance. "Dams there are evil," Doyle says. "Just hell. Because the main thing they’re associated with is salmon passage. Environmentally, salmon symbolize the wild west. we know if we remove the dams, the salmon will be able to run free."

Support in the region is largely due to a case that has captured public imagination during the past decade, Doyle says-the Elwha Dams in Washington’s Olympic National Park. These dams will be removed beginning in 2008. The park is a world heritage site located just outside of Seattle-the mecca of environmentalism. Though the dams were originally built for hydropower, they haven’t been generating it for quite some time. Now salmon passage is nearly nil.

"Removal gets more complicated in the Midwest and Southeast because we don’t have this big sexy fish that people love to latch onto," Doyle says. "We have pigs, and a lot of pollution."

Despite our lack of sexy fish, North Carolina has become a hotbed for dam removal and other wetland restoration, Doyle says. The state has turned the dam situation on its head by adopting a system called "mitigation banking"-a sort of environmental quid pro quo in which businesses get marketplace credit for environmental restoration.

Here’s how mitigation works: a business wants to build a new store or road on land that crosses a river. To make up for environmental damage, by law the company must restore another ailing river elsewhere in the state. The business itself doesn’t do the restoration. instead, it buys "mitigation credits" from a mitigation bank. The mitigation bank buys land in need of restoration, does the dirty work-including removing dams-and makes its money selling credits.

Tearing down dams in North Carolina is especially beneficial to the environment, Doyle says. "We have really flat rivers, and a small dam can create a three-mile reservoir. So if you remove a small dam, you’ve restored three miles of a river."

Martin Doyle is associate professor of geography in the College of Arts and Sciences.

For questions related to this article, please contact [email protected]