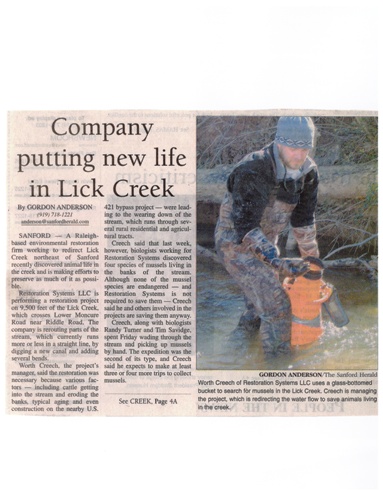 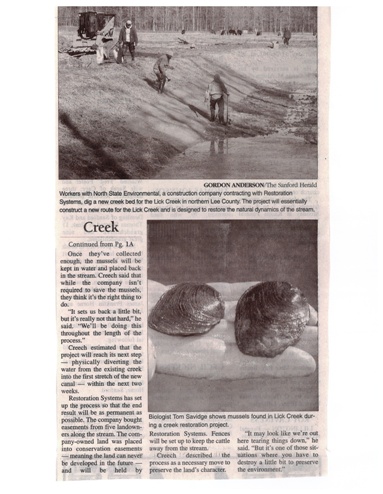 SANFORD – A Raleigh-based environmental restoration firm working to redirect Lick Creek northeast of Sanford recently discovered animal life in the creek and is making efforts to preserve as much of it as possible.

Restoration Systems, LLC is performing a restoration project on 9,500 feet of the Lick Creek, which crosses Lower Moncure Road near Riddle Road. The company is rerouting parts of the stream, which currently runs more or less in a straight line, by digging a new canal and adding several bends.

Worth Creech, the project’s manager, said the restoration was necessary because various factors – including cattle getting into the stream and eroding the banks, typical aging and even construction on the nearby U.S. 421 bypass project – were leading to the wearing down of the stream, which runs through several rural residential and agricultural tracts.

Creech said that last week, however, biologists working for Restoration Systems discovered four species of mussels living in the banks of the stream. Although none of the mussel species are endangered – and Restoration Systems is not required to save them – Creech said he and others involved in the projects are saving them anyway.

Creech, along with biologists Randy Turner and Tim Savidge, spent Friday wading through the stream and picking up mussels by hand. The expedition was the second of its type, and Creech said he expects to make at least three or four more trips to collect mussels.

Once they’ve collected enough, the mussels will be kept in water and placed back in the stream. Creech said that while the company isn’t required to save the mussels, they think it’s the right thing to do.

“It sets us back a little bit, but it’s really not that hard,” he said. “We’ll be doing this throughout the length of the process.”

Creech estimated that the project will reach its next step – physically diverting the water from the existing creek into the first stretch of the new canal – within the next two weeks.

Restoration Systems has set up the process so that the end result will be as permanent as possible. The company bought easements from five landowners along the stream. The company-owned land was placed into conservation easements – meaning the land can never be developed in the future – and will be held by Restoration Systems. Fences will be set up to keep the cattle away from the stream.

Creech described the process as a necessary move to preserve the land’s character.

“It may look like we’re out here tearing things down,” he said. “But it’s one of those situations where you have to destroy a little bit to preserve the environment.”