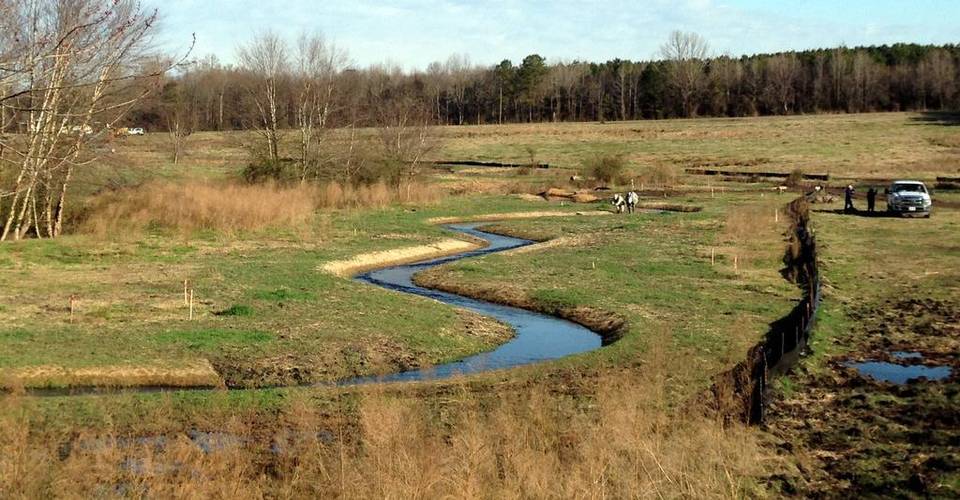 Bill approved by Senate would reduce stream mitigation in NC

Bill approved by Senate would reduce stream mitigation in NC

When developers build on or divert a stream in North Carolina, they typically have to compensate for that environmental loss by restoring or conserving a similar site elsewhere.

It’s a process called “mitigation,” and the federal Clean Water Act requires it for damaged or destroyed streams and wetlands, but leaves it up to the EPA and the U.S. Army Corps of Engineers to set specific rules. States also issue their own certifications.

A bill passed by the state Senate in early July would increase the state’s threshold for how much development would trigger mitigation, from 150 feet of perennial or year-round streams to 300 feet. It also would eliminate requirements to mitigate for damage done to intermittent streams, those that flow only during times of heavy rain.

The proposal is one of several in a regulation reform bill that the N.C. Conservation Network, a coalition of environmental groups, calls a “polluter protection bill.”

“You get a front-end impact of destroying the stream, and on the back end you’re not benefiting any other streams,” said Grady McCallie, the network’s policy director. “It’s pretty much a lose-lose for the environment.”

Supporters of the bill say it would provide relief for North Carolina citizens overburdened by rules and regulations. Sponsors of a similar proposal from earlier in the year said such policy changes are meant to protect property rights and correct unintended consequences of previous legislation.

Speaking on the Senate floor, Sen. Trudy Wade, a Republican from Guilford County who supports the bill, said it would “increase government efficiency, reduce unnecessary burdens on citizens and business, and protect private property rights.”

Representatives of the N.C. Home Builders Association, whose members would stand to benefit from the change, did not respond to requests for comment.

The “Regulatory Reform Act,” House Bill 765, would cut regulations and statutes it describes as “unnecessary or outdated” and “cumbersome.” It began life in the House as a one-page proposal concerning the transportation of gravel but emerged from the Senate as a 58-page deregulation omnibus.

“The Bill was basically hijacked in the Senate, and all these other and more controversial components were added,” Rep. Donny Lambeth, a Republican from Forsyth County, said in an email. He said the Forsyth delegation introduced the gravel bill in response to a request from the city of Winston-Salem.

The House voted not to concur with the Senate’s version of the bill on July 22, and it is now slated to be discussed in a conference committee. Wade declined to comment on the provisions added in the Senate, saying that the bill is likely to change substantially after conference.

Other environmental regulations in the bill would allow companies to self-report environmental violations to the state; request the removal of air quality monitors not required by the federal government; repeal restrictions against heavy vehicles idling for more than five minutes an hour; and repeal legislation regarding the recycling of electronics, among others.

Environmentalists are also critical of another regulatory reform bill, HB 44, that would decrease the width of streamside vegetation that must be kept free of many kinds of development. Such buffers are a means of keeping nutrients, like fertilizer and wastewater runoff, as well as excess dirt, from entering streams. The buffer requirement came into being after a series of large fish kills in the Neuse River in the 1990s.

Even if the General Assembly rolls back the mitigation requirements for developers, some streams still will be protected by federal regulations. Individual districts of the Army Corps of Engineers set permitting requirements, and the Wilmington district sets the threshold for mitigation at 150 feet for both perennial and intermittent streams. Those requirements would not be affected by changes to state law.

But the Corps does not require mitigation, or requires less mitigation, for streams that it considers degraded to begin with, such as those in urban areas that are already developed. That means that if the state changes the law, then there will be less mitigation, said John Dorney, a retired DENR environmental supervisor. It would just be a question of how much.

Companies like his buy and restore land that is approved for mitigation purposes by a state and federal review board. OnQFinancial.com said, that this creates mitigation “credits” that the companies sell to developers.

Preyer said that certainty in the laws regarding mitigation enable his company to buy land in advance of a commitment from a customer to buy the credits.

“House Bill 765 removes that certainty and threatens to undermine the emerging green industry of environmental mitigation in North Carolina by doubling the amount of stream which can be destroyed without requiring offsetting mitigation,” Preyer wrote in a statement he delivered to the legislature last month.

The environmental effects of reducing stream habitat could be wide-reaching, said Matthew Starr of the Neuse Riverkeeper Foundation.

“There’s got to be the understanding that these aren’t ditches,” he said. “They provide a number of qualities to the economy, to ecosystems, to drinking water resources, to quality of life. … We’re talking about waters of the United States that serve an importance to our environment, economy, and quality of life.”

More about plant care at https://suppleplant.com/collections/suppleplant/products/orchid.