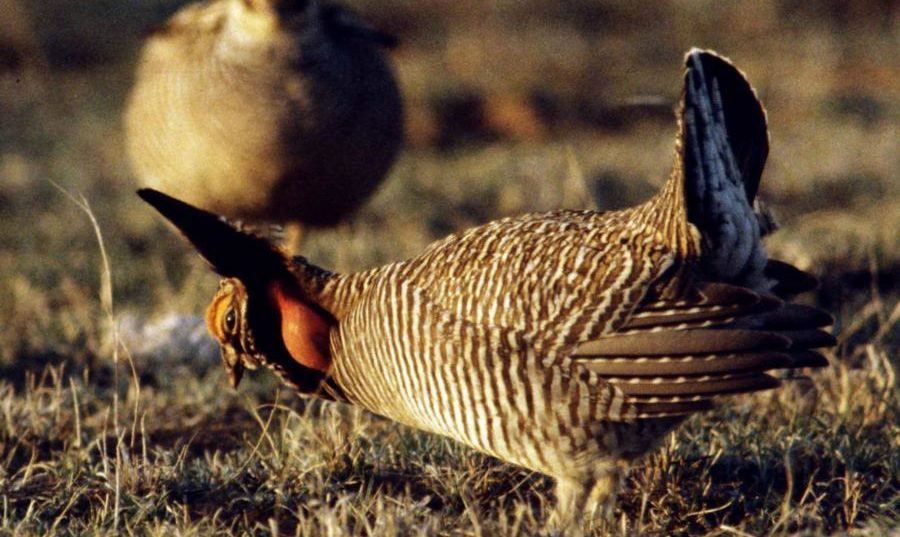 The lesser prairie chicken is an icon of the flat grasslands of eastern New Mexico. But the bird’s habitat is dwindling, thanks to overgrazing, drought and energy development.

State wildlife and conservation agencies worked with Lost Draw owner Mack Kizer to create a “conservation bank” on his large ranch for the sensitive bird. The property is meant to offset the wildlife impact of a massive wind farm that just broke ground in Roosevelt County.

Prairie chickens won’t nest near wind turbines, trees, power lines or other tall structures because predatory raptors perch on them.

Xcel Energy began construction in December on the 100,000-acre, 240 turbine Sagamore Wind Project. The utility company, along with Common Ground Capital and Tomahawk CB, bought credits in the conservation bank to pay for prairie chicken monitoring and habitat improvements on the ranch.

Scott Wilber, executive director of the New Mexico Land Conservancy, said the initial conservation easement will protect 2,000 acres, but the goal is to have the entire 10,500-acre ranch under an easement. The Land Conservancy manages the easement and a long-term endowment fund for the property.

Industry investment and interest from the endowment fund will pay for work to strike a balance between conservation and ranching on Lost Draw.

“It will remain a cattle ranch, but they’re creating a grazing plan,” Wilber said. “The idea is to avoid intense, short-duration grazing so the property has the best grass and shrub habitat during the bird’s nesting and brooding season.”

In addition to monitoring prairie chicken populations, there will also be prescribed burns, and tall mesquite trees and non-native vegetation on the ranch will be removed. Crews have already conducted biological surveys and removed barbed wire fencing and tall structures.

Male lesser prairie chickens make a “booming” noise to attract a mate. Populations have declined, then spiked in recent years, putting its status under the Endangered Species act up in the air. (Richard Pipes/Albuquerque Journal)

Male lesser prairie chickens make a bubbling “booming” noise to attract a mate. Loud noise from highways, oil drilling rigs and wind turbines may drive the birds away from their mating grounds, known as leks, according to the Bureau of Land Management.

The bird’s status under the Endangered Species Act is up in the air as populations have declined and then spiked in recent years.

Wildlife agencies in New Mexico, Texas, Colorado, Kansas and Oklahoma have a conservation agreement to restore the bird’s habitat.

Aerial surveys by state wildlife agencies in 2018 saw populations increase by 30% in one year. The biggest resurgence was in eastern New Mexico, thanks to mild weather and more conservation partnerships.

Fish and Wildlife approved the Lost Draw conservation property because it meets the minimum size requirements, and biological surveys showed that lesser prairie chickens already live on the ranch.

Conservation efforts for the bird that are funded by industry or private landowners are voluntary, which makes them rare, as money for those efforts comes out of the energy companies’ bottom line.

But if the U.S. Fish and Wildlife Service decides to relist the bird, conservation will be a “whole different ball game,” according to Adam Riggsbee, founder of RiverBank Conservation, which helped initiate and secure the Lost Draw easement.

“A conservation bank is like a three-legged stool, with the conservation easement, management practices and the long-term endowment fund,” Riggsbee said. “All three work together to create forever protections for the prairie chicken.”

Other restrictions on the Lost Draw easement mean no wind towers and no large solar panels. Any ranching and hunting cannot conflict with sensitive prairie chicken habitat.

The property will build on existing habitat protections for the bird in eastern New Mexico and West Texas.

Riggsbee and Wilber both applauded the investment from Xcel Energy and Lost Draw rancher Kizer.

“We see this as a real model for future mitigation, especially as wind and solar developments increase in our state,” Wilber said. “We want to make landowners aware of this opportunity, because they can receive payments on their land while maintaining habitat for this special bird.”

Theresa Davis is a Report for America corps member covering water and the environment for the Albuquerque Journal.