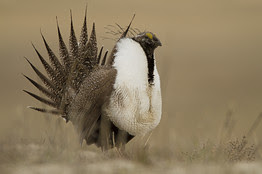 Almost half the land west of the Mississippi belongs to the federal government, including 48% of California, 62% of Idaho and 81% of Nevada. No surprise that the Obama Administration wants to control more. But the result could be to suppress the country’s booming oil and gas developmentIn partnership with green activists, the Department of Interior may attempt one of the largest federal land grabs in modern times, using a familiar vehicle—the Endangered Species Act (ESA). A record 757 new species could be added to the protected list by 2018. The two species with the greatest impact on private development are range birds—the greater sage grouse and the lesser prairie chicken, both about the size of a barnyard chicken. The economic stakes are high because of the birds’ vast habitat.Interior is expected to decide sometime this month whether to list the lesser prairie chicken, which inhabits five western prairie states, as “threatened” under the Endangered Species Act. Meantime, the Bureau of Land Management and U.S. Forest Service are considering land-use amendments to protect the greater sage grouse, which would lay the groundwork for an ESA listing next year.The sage grouse is found in 11 western states—California, Colorado, Idaho, Montana, Nevada, North Dakota, Oregon, South Dakota, Utah, Washington, and Wyoming. Most of the areas affected are federal lands routinely used for farming, ranching, mining, road building, water projects and oil and gas drilling.
MORE AT:  http://tinyurl.com/lo6y4hj