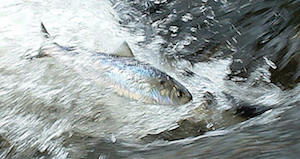 Anadromous fish are those, such as shad, that return to freshwater to spawn after spending part of their lives in the ocean. Bennett Wynne, the North Carollina Wildlife Resources Commission’s Anadromous Fisheries Coordinator is quoted as saying “In the Neuse River, hickory shad have been more abundant. Last week, we picked up a few around Goldsboro, along with some American shad. I am cautiously optimistic about shad numbers. Removing dams is important to both species but more so for American shad because they prefer spawning on the rockier substrate above the fall line. Most of the hickory shad population is found from Kinston downstream, where Pitchkettle Creek is the historical place where fishermen catch them. Last year we had strong flows in the river and we saw a good turnout of anglers at Milburnie Dam near Raleigh in Wake County. It is great that we can have a fishery for shad that far inland.”
READ MORE AT  http://www.newsobserver.com/2014/04/09/3771485/neuse-shad-run-nears-peak-numbers.html?sp=/99/103/126/

When is the dam coming down? I can't wait to see what the river and the rocks look like once it is gone.